This is the first ever one week national laughter festival! It is a community festvial, non commercial, to share a laugh and have fun. We also want to show why laughter is the best medicine - for health, happiness, lowering stress and building communities!

I don’t think that I have ever spoken, over the phone, to a more enthusiastic person, who is absolutely passionate about the subject of laughter and the great benefits it holds for humanity.


However, it is when one looks at the enormity of what Robin Graham put together to form the UK National Laughter Festival and Championships that one really gets an inkling of his commitment.
In my experience most “festivals” start their existence as a weak-kneed, weekend event. As the legs strengthen, they may or may not expand by a day or two each year until they cover a whole week.


Not Robin’s event. He went straight for eight days!
Day one began with simultaneous laughing events in Scotland, Wales, England and Ireland!


Day four had more free Laughter Yoga sessions in the centre of the city but also included a Chamber of Commerce business breakfast presentation, a Laughter session in a day centre for older people and a dissemination session on something called the HAHAs European Project. This is a project that has been going since 2010. It was set up to explore the connections within humour across age groups and cultures in Europe.
Thursday was day five and this was the day of the World Record!  It began with one person laughing and then passing their laugh on to at least one other who, in turn, did the same. A record of four hours of continuing laughter, with at least one person laughing at all times, was established.


There was also a Community Laughter session at St Clements Church in Cholton, after which the Cholton Film Society gave a screening of “Salt of Life”, a warm, witty comedy.
Friday, which was day six, was Conference Day, from 10:30am to 4:30pm. It was a day of learning, laughing and looking at how people can use laughter positively in their lives, with a particular focus on carers and community groups.


The Saturday saw the first UK National Laughter Championships at The Comedy Store in Manchester.
The final day on Sunday began with a free, 30 minutes, Laughter Workshop at The Lowry in Salford.


The focus then moved along the road to Macclesfield for a talk and Laughter Workout at the Barnaby Festival. The National Festival was brought to a close with a final open-air Laughter Yoga session.
Robin told me that the whole event was a success, with almost 1000 participants across the events. He intends to run the event again next year but would appreciate some enthusiastic help.


He would like to see the event growing and moving to other cities as years go on.  If you would like to get involved, please email Robin on robin@feelgoodcommunities.org.
Robin was very serious when he said to me, “If we can get everyone laughing, we will change the World!”

Posted by World Laugher at 16:29 No comments:

Wow, early start for a business breakfast talk on the 23rd floor of the Hilton Hotel - great views and great points of view.

The off to Miles Platting for a chat with staff at the Age Concern day centre before laughing with the visitors!

And then our final laugh in Piccadilly Gardens before curry and rice in the local restaurant.

And I forgot to take photos all day!  What a laugh!

Schools today!  An interview on BBC Radio Manchester with the Deputy Head, Merrill Blackburn, at Chorlton Park Primary, then a laughter assembly (years 3 and 4) and a discussion (year 5).

And then a session in Rochdale at a secondary school, after school hours.  Intelligent discussion!

Posted by World Laugher at 06:39 No comments: 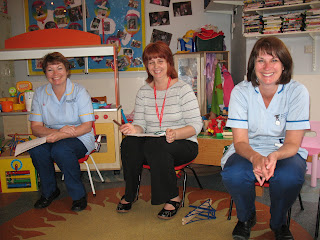 Being childlike in pediatrics at Wythenshawe hospital! 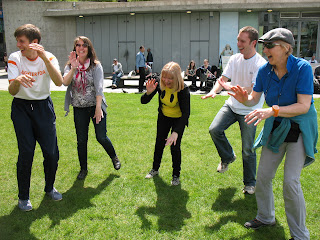 Laughter Yoga is Piccadilly Gardens!
Posted by World Laugher at 06:23 No comments:

Sunday and the festival launches! 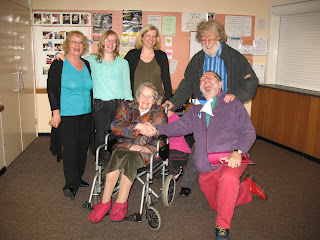 The first day of the festival!  Launched in Manchester with an interview with Gordon Burns for BBC Radio (Manchester and Lancashire) then off to the Roby in Longsight to join Rev David Gray and his congregation where the service has a theme of laughter!  We laugh in Longsight at the same time as Jo's group laughs in Edinburgh, Jayne's in South Wales, Jackie in Northern Ireland, Lesley on the Isle of Man, and Saroj in London. 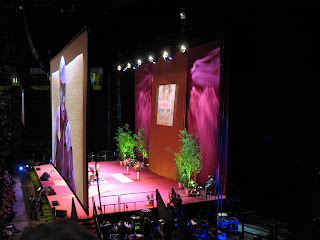 Then listening to His Holiness The Dalai Lama at the Manchester Evening News Arena, to hear about love and compassion and making our world the best home for us in the 21st Century. 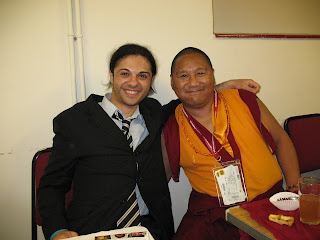 And then a Tibetan Banquet, provided by Tibetan Kitchen, meeting in the Friends Meeting House, with a laughter session, and greetings laughter before the meal as we use laughter to say hello and relax with strangers who are no longer strangers!
Posted by World Laugher at 07:31 No comments:

for more information on the festival!
Posted by World Laugher at 16:24 No comments:

Supporters of the festival!

With a little over a month to go, Manchester is gearing up to laugh!

Thanks go to Feelgood Communities CIC, the Laughter Network, Trafford Carers Centre, Frankfurt council, The Rotary Club of Manchester, The Comedy Store Manchester and all the people who have shown support!

Look out for the community conference, the world record and the championships! 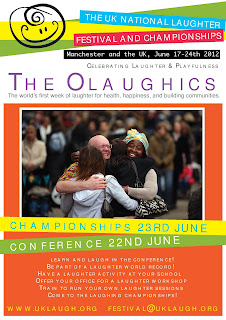 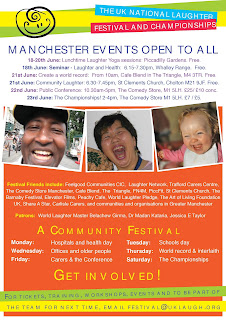 www.uklaugh.org for details!
Posted by World Laugher at 17:50 No comments:

Must see trailer!! This is the UK heat for the World Laughter Championships

Here are the main activities on a daily basis in Manchester and the North West of England. Each day has a theme.